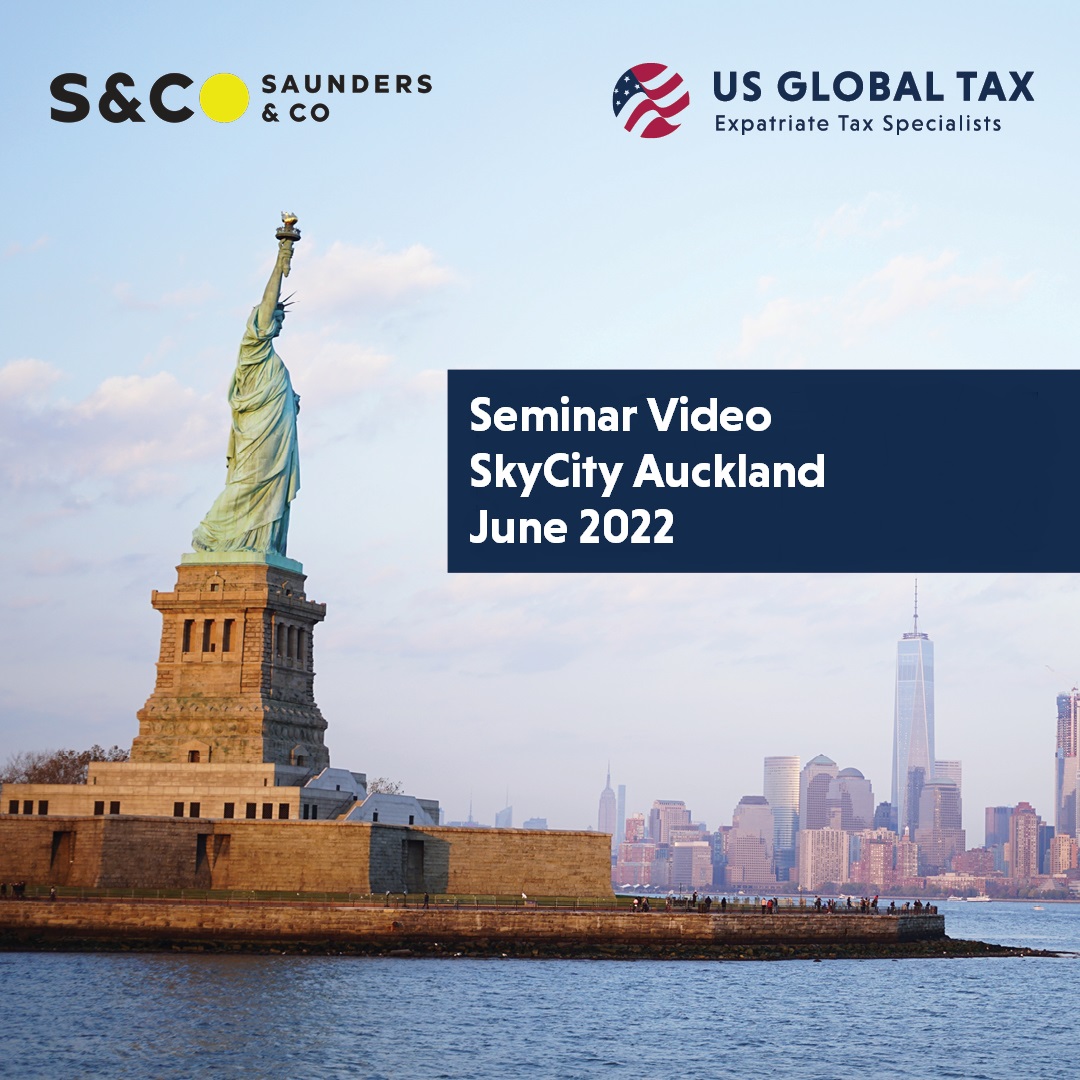 During June 2022, US Global Tax presented a series of seminars alongside Saunders & Co Lawyers. The seminars mainly covered tax issues that new US migrants to New Zealand would need to be aware of.

The first part of our seminar discusses tax residency, from a US and NZ perspective.

So, the fundamental basis to the New Zealand tax system is obviously the concept of tax residency, and that would be fair from all jurisdictions. So, it’s really important that we start with, what is tax residency? So in New Zealand, we have two tax residency tests. The first one is a day count test. You can’t manipulate that you’re either in the country or you’re not. One minute counts as a day. What is often very frequently, incorrectly calculated is the day count based on a rolling 12 month period, and it does backdate the first day of your presence. So ,I see a lot of people caught. They might migrate to New Zealand on the 1st of May, but they’ve taken a previous trip on early January that same year to check out New Zealand, their tax residency status will backdate. The other tax residency test is a lot less clear and draws heavily in a revenue interpretation statements, which comes from case law.

And, that is the permanent place of abode test. I’m not going to bore you with the details of that because it’s extremely facts driven, but basically it means, do you have a home here? What is a home is actually the challenging point here, but in its very simplest concept, if you are staying in a hotel, you are not likely to have a home in New Zealand. So, it’s only one of the two that you have to meet to become a New Zealand tax resident, but you have to not have either of them to cease to be a tax resident. So, it’s really important to get tax advice on your tax residency status because basically all new Zealand’s taxing regimes come back to whether you are a tax resident or not.

So from a US standpoint, as so many of you already know, the US ties tax residency to citizenship. So, this is one of a very, very small group of countries who do this, only three, but what it means is when you live in New Zealand, when you live anywhere else in the world, you are still a tax resident of the US. You need to file tax returns, you need to report your income to the US, but one of the most frequently asked questions, which almost at least once a week is, if I’m living in New Zealand, do I still need to worry about the substantial presence test? Now, that is going to the US for greater than 183 days, or even as little as say 30, 40 days in a single year. Basically, because you are already a tax resident of the US, if you are a US citizen, or you are a green card holder, then traveling to the US essentially makes no difference.

As long as you don’t travel for long enough that you would lose your New Zealand tax residency, which as Julia has just said, it would require more than just going on holiday, then really you are free to travel as often as you like and for however many days as you like. The only time that it can really affect, so your travel to the US can really affect your tax return really is with regards to the foreign earning income exclusions. So, many of you will have seen this on your tax returns. This is where we’re able to exclude your foreign wages. Any earned income up to certain thresholds we can exclude it from taxation. Now, you will see on the form that it asks you, have you been outside the US or inside the US for greater than 30 days? Now, this is the physical presence test for the foreign income exclusion and lots of people think, “Okay, if I’m going to spend greater than 30 days, I’m going to spend 100 days in the US, or I’m going to go for a three month holiday and I can no longer use exclusion.”

Now, this isn’t the case. There is two tests. So, we either have the presence test or the bonafide residence test. Now, bonafide residents refers back to what Julia was saying, that is, are you a tax resident of another country? The tax treaty has a tie breaker, so this is basically a rule where if you are a tax resident of both, and there is any say slight argument, or maybe which country has a first right to tax, this is where we use the tie breaker.

Now, for somebody who lives in New Zealand, has their home here, has their car, their family, if you travel to the US for four months, you’re still going to remain a tax resident of New Zealand, not unless you move there and buy a house and set up a new life again back in the US. But saying that, the foreign income exclusion, if you are using, say a tax accountant, ideally it’s not the best form of… Well, it’s not the best method for preventing tax in the US anyway. It’s simple, it can be done by people without a great deal of say background knowledge, but we have other solutions, say foreign tax credits, which have long term impact to say where they can be carried forward. So, ideally the foreign income exclusion, just in summary, you travel to the US, it doesn’t really affect it, but it’s not the most beneficial form for US citizens to be using anyway.

So, back to New Zealand tax residency, and you’ve probably all heard of transitional tax residency. This is a gift, basically it means that your first four to five years of tax residency provides you with an exemption on foreign passive income, and I say four to five because this comes back to the original question of, how did you become tax resident? I see this calculated incorrectly by accountants about 90% of my time of doing this. So, the test isn’t quite as simple as, when did you first arrive in New Zealand? And, the reason why it can be up to five years is because it looks at when you first met the tax residency test under either of those two tests I’ve talked about. So, you would only meet the day count test by being present in New Zealand for 184 days, which could be right at the end of the rolling 12 month period.

And, therefore that tax residency backdates to the first day, but you haven’t met the test until the 184th day, so then it’s the end of the end of the 48th month after that. So, transitional tax residency is really, really important. It allows you to restructure your affairs. If you’re looking at staying in New Zealand permanently, you might want to migrate your assets and your wealth to New Zealand, and that can be done often completely tax free, but if you do one thing wrong or apply for something that comes in a day late, or you’ve miscalculated your transitional tax residency period, that would then be subject to the full taxes. So, it’s really beneficial to seek advice in relation to that early on, and the key part is getting the tax residency dates right, so that the transitional residency dates are right.

One of the most important points is that it’s only foreign passive income that is exempt. Lots of people think that it excludes all income. We’ll talk more about income for working for offshore entities later, but it is really important to note that if you are living and working in New Zealand, then that is not subject to a transitional tax residency exemption. So, I think I’ve covered off most of these things. Basically, if you have foreign super or pensions, any government pensions, if you’ve got a trust or you’re involved in a trust in any way, a trustee, beneficiary, [inaudible 00:07:41] or any of the above, you’d want to be looking at the trust because trust themselves don’t have tax residency status under New Zealand tax law. So, they are an entire seminar by themselves and then any foreign denominated bank accounts and any foreign shares and properties, so all income from those things during the first four years is completely… Well, while you’re a transitional tax resident completely exempt in New Zealand. S, it is a gift and you should use that time wisely.

So from a US perspective, transitional tax residency is an excellent time to move to New Zealand, so to move financially, move your assets, move pensions. Of course, you do need to spend some time to think whether New Zealand is where you’ll settle for the rest of your life, but once you’ve made that decision, as Julia said, it is a very generous offer, almost… That doesn’t exist in any other country that I’m aware of. One thing you need to be mindful for, however though, is that it’s very common that we see it at US global taxes. People make the assumption that, okay, I live in New Zealand now. New Zealand has first taxing right to many different sources of income that I have, say some bank interest from the us, but where New Zealand doesn’t tax this income during the transitional residence period, the US then retains its right, which means you have to pay US taxes in full on any passive income you have in the country, so that’s dividends, interest, any other form of passive income.

On the other hand, it’s also a very, very wise time to look at things, say like IRAs. Now, Julia of course can go into this in a little more detail, but say things like a Roth IRA. During your transitional residence period, you can withdraw it, it’s not going to be taxed in New Zealand, but say 20 years down the line, it will be taxed in New Zealand. So, the tax free status of say a Roth IRA, it’s not going to be respected outside of that transitional residence period. So, it is a perfect time to say sell any US assets. Maybe not if you’ve gotten any investment portfolio, maybe not right now, but within hopefully in the next year or so.

It’s a perfect time to withdraw from say any US pensions, any other us portfolios before they say face the issues of fifth income in New Zealand, which we’ll cover in a couple of slides, but to use it wisely, and if you’re not sure exactly whether now is the right time. Am I a transitional resident? You should reach out and obtain advice at least within that four year period from when you first moved to New Zealand.